Having written on duality, especially that of creation and destruction, I’m thinking of elements in my oldest project. If you look at my blog’s header, you’ll notice the following four symbols: 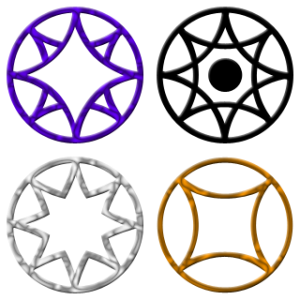 I have these tattooed on my inner right forearm; they represent four principal deities in Project: Destiny, and also the four domains of magic they govern. The symbols don’t derive any meaning from their shape. They are all manipulations of the orange symbol, the oldest and simplest of them.

Violet represents the duality of creation and destruction. In Project: Destiny, it also is the domain of reality and its boundaries.

Next is black, the color of chaos, secrets and lies. It also represents the future, as entropy dictates that order must descend into chaos; and thus mortality and death.

In opposition, white is the color of order, knowledge and truth; as well as the past. Black and white do not represent good and evil, however. Both lies and truth can be used to either end, as can chaos and order.

Orange is a special color in the world of Destiny. It represents many things, primarily oaths. In the world of Destiny, people are taught to never swear an oath to someone they cannot trust with their lives, as skilled “wizards” can use their power to bind the unwary to fulfill such an oath. Orange also represents language, blood ties, and humanity. This is in opposition to violet, whose power over creation and destruction can be compared to the power of gods.

Four other symbols complete this set, and these are tattooed on my left forearm: one for each of the classical elements of water, fire, earth and air. Together, these make up the eight colors of magic as portrayed in Project: Destiny.

I find it very important that magic have limits. If a character is backed up against the wall only to cast some kind of spell as a last resort, it needs to be realistic enough to be anticipated by the observant reader. If magical folk can spell their way out of any unpleasant circumstance by bending the laws of nature, they quickly become irritating. For this reason, I spend a lot of time on the way magic works in my fantasy projects. What does it cost the user? What can it do? How can it be beaten? When is it not worth the effort?

I feel like a learned a long time ago that for it to be worth the read, fantasy has to be realistic. The best-defined magic system can make all the sense in the world, and no one will give a damn if the characters aren’t interesting or don’t do anything worth reading about. Otherwise it’s all pretty colors without any substance underneath.