Is there any person in the world who does not dream? Who does not contain within them worlds unimagined?

Another volume consisting of several stories, this one takes place in a tavern at the end of the worlds where several folk have been stranded thanks to a reality storm. It is their wish to share their tales until such a time as they can return to the worlds from whence they came. We have a story of a boy upon a ship at sea, a tale of an alternate United States in which a boy name Prez becomes president, and a tale of a city concerned with proper treatment of the dead and the rituals surrounding death, among others.

This volume ends similarly to the previous one; we know that something momentous is occurring, but we know not what. As one of our human characters gets a glimpse of Death, he thinks the following:

I think I fell in love with her, a little bit. Isn’t that dumb? But it was like I knew her. Like she was my oldest, dearest friend. The kind of person you can tell anything to, no matter how bad, and they’ll still love you, because they know you. I wanted to go with her. I wanted her to notice me. And then she stopped walking. Under the moon, she stopped. And looked at us. She looked at me. Maybe she was trying to tell me something; I don’t know. She probably didn’t even know I was there. But I’ll always love her. All my life.

I am eager to procure the final two volumes and learn what is to become of Dream and the rest of the Endless.

Truly, life is the misery we endure between disappointments.

I heartily enjoyed these books for setting many fantasy conventions on their heads, for introducing realistic characters who defy expectation without seeming to go against their natures. I love that my favorite character is a torturer and that I am still fascinated and intrigued by who I am sure is the villain.

I don’t believe this trilogy reads well if one jumps into the middle or the end. Each book is nicely encapsulated, but the whole story must be read to be appreciated. For that reason, I find it difficult to say much about the final volume without spoiling some of the surprises in the first two books.

I will say the pace of this third book does annoy me somewhat. It is split into two parts roughly down the middle; I slogged through the first 300 pages, replete with battles and death and strategies. I’m a fantasy fan who doesn’t care much for action, I prefer the magic and intrigue of it all. There is no lack of intrigue, however; our dear torturer friend has gotten himself into a bit of trouble concerning divided loyalties and blackmail.

The book more than makes up for Part I with Part II, which I tore through despite already having read it once before and having discovered the major revelations at the end. I love the ending for not being the joyous peal of “And then the world was saved and the kingdom rejoiced”. War leaves terror and ruins in its wake, and it’s fitting that the ending reflect that. The end of a war does not solve all of a kingdom’s problems either.

For me to say too much more would spoil more than is appropriate. I love the characters, from self-centered Jezal who has found himself way in over his head, to Ferro and her single-minded pursuit of vengeance. Sand dan Glokta is far and away my favorite character; a shattered ruin of a man, hobbling through each day one at a time through constant pain, ever asking why he does what he does. I suspect he only makes it through his days through heavy use of his dry sense of self-deprecating humor.

I finished Fables & Reflections last weekend and thought yesterday would be a prime opportunity to pick up the next volume at a bookstore downtown. Yes, the second-to-last shopping day before Christmas. Great idea. The bookstore was packed and alas, only copies of the first volume of the Sandman remained on the shelves. I left without purchasing anything, despite the many tempting journals on the ground floor.

I believe this is as far as I’ve ever gotten in the Sandman. In high school, I asked the local library to borrow the volumes from other libraries. It always took weeks before the next volume arrived, so eventually I grew discouraged and stopped. Then the summer after my senior year when I had no bills but a nice cashflow from working 20 hours a week at Subway, I didn’t think to finish the series.

Fables & Reflections was an interesting journey through the pages of history. It didn’t really advance Dream’s story at all, but it was filled with gorgeous imagery and interesting characters and scenarios. I especially enjoyed seeing all of the Endless in one place for the first time; I believe in the main narrative that I’ve yet to see Destruction.

One of my favorite things about Dream is that he’s flawed, he often lets his stupid pride get in the way of acting as he should. I relate to that, despite my mortal limitations. I also enjoy seeing him as envisioned by different artists, or by different characters with different religious views and so he fits differently into each of their pantheons. I think it’s a fine metaphor for the way each of us looks different and is something different to each of the people we interact with.

I was pretty well confused when I went to buy the next volume of the Sandman from Chapters a couple weeks back. The cover of the new, remastered version of volume six is remarkably similar to that of volume one of the previous version. See here:

While I was certain that volume six was the next one to buy, the cover threw me for a minute and it wasn’t until I was in the train reading it that I was sure I’d bought the right book.

I’m currently rereading the third book of The First Law trilogy, a series recommended to me by a friend, a series that I quickly fell in love with. The world is realistic and gritty, rife with violence and danger; the characters are interesting, engaging, and defy archetypal expectations; and, most importantly for me, magic makes sense and has dire consequences if misused or used too freely. 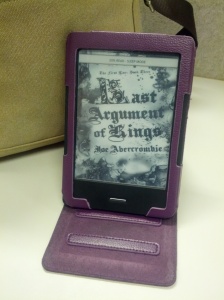 The author, Joe Abercrombie, has decided not to provide us with a map of his world, which suits me fine. Most of what I read these days is on my Kobo, which doesn’t display maps very well; I didn’t know the true shape of George R. R. Martin’s world of Ice and Fire until I bought the poster set of maps last year. Maps are lovely, but they can be distracting while reading. I have a tendency to flip to the front flap to see exactly where people are talking about.

Because of the lack of a map, we are forced to imagine the Circle of the World and its various regions. Luckily, three of these regions can be accurately named the North, the South and the West. The books visit all three of these and presents conflicts between certain regions and the central (I believe) kingdom of the Union, a kingdom filled with self-serving and/or empty-headed gentry struggling to seize power in the midst of the king’s declining health.

I greatly enjoy the writing, there is a lot of humor (especially dark humor) in it. I find myself highlighting certain passages to share them with my husband while we’re in the métro. My favorite characters are the soldier turned torturer after an extended imprisonment in the South rendered him unfit to do much else, and the highly manipulative and secretive Magus, pulling the strings with unknown intentions.

The trilogy contains a few revelations near the end that make the books more interesting to reread, though I would give them another go if only for the world and the characters and the writing. To any fan of fantasy who enjoys stories that do not take themselves too seriously (though the tone is quite serious indeed through a lot of the tale), I highly recommend The First Law trilogy: The Blade Itself, Before They Are Hanged, and Last Argument of Kings.

Incidentally, I found a new way to read on the train, making excellent use of my winter coat and my Kobo’s protective case: 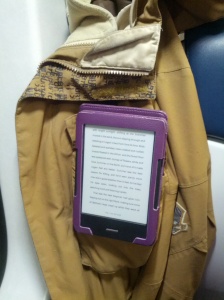 Joseph Gordon-Levitt announced last night that he is honored to be working with Warner Bros., David Goyer, and Neil Gaiman to bring The Sandman to life as film. There’s a lot to unpack here, so lets get started.

As with any talk of a film adaptation of a literary work, I am equal parts excited and fearful. I am also 100% interested in seeing how this progresses.

I have been working on reading the Sandman from beginning to end. By “working on”, I mean that every few months or so I purchase the next trade volume at Chapters and proceed to devour it in a couple hours. I tried to finish them back in high school, ordering them at the library and waiting weeks between volumes, but the waiting became tedious. I had downloaded them and got a comic reader for my computer, but I quickly learned that I dislike reading for extended periods on a computer screen. I prefer to pay for them anyhow.

I love the way Neil Gaiman weaves a narrative through mythologies and literature. I feel proud for the references and subtle nods that I pick up on, knowing there are many more that fly right past me. I love the art, especially the sweeping vistas of the realm of dreams. I especially adore the personifications that are the Endless, each with their own quirks and personality flaws.

I am midway through Fables & Reflections now, using the security device as a bookmark. I had meant to slip it into my bag before work on Friday, but alas I forgot. I’m half tempted to dive into it right now, but I haven’t gotten any writing done for Project: OBSIDIAN this weekend and I really ought to put some effort toward that before I feel like a complete and utter failure.

To the stars it is, then.