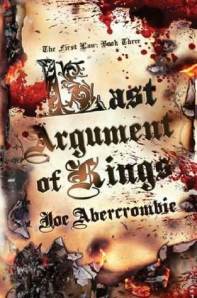 Truly, life is the misery we endure between disappointments.

I heartily enjoyed these books for setting many fantasy conventions on their heads, for introducing realistic characters who defy expectation without seeming to go against their natures. I love that my favorite character is a torturer and that I am still fascinated and intrigued by who I am sure is the villain.

I don’t believe this trilogy reads well if one jumps into the middle or the end. Each book is nicely encapsulated, but the whole story must be read to be appreciated. For that reason, I find it difficult to say much about the final volume without spoiling some of the surprises in the first two books.

I will say the pace of this third book does annoy me somewhat. It is split into two parts roughly down the middle; I slogged through the first 300 pages, replete with battles and death and strategies. I’m a fantasy fan who doesn’t care much for action, I prefer the magic and intrigue of it all. There is no lack of intrigue, however; our dear torturer friend has gotten himself into a bit of trouble concerning divided loyalties and blackmail.

The book more than makes up for Part I with Part II, which I tore through despite already having read it once before and having discovered the major revelations at the end. I love the ending for not being the joyous peal of “And then the world was saved and the kingdom rejoiced”. War leaves terror and ruins in its wake, and it’s fitting that the ending reflect that. The end of a war does not solve all of a kingdom’s problems either.

For me to say too much more would spoil more than is appropriate. I love the characters, from self-centered Jezal who has found himself way in over his head, to Ferro and her single-minded pursuit of vengeance. Sand dan Glokta is far and away my favorite character; a shattered ruin of a man, hobbling through each day one at a time through constant pain, ever asking why he does what he does. I suspect he only makes it through his days through heavy use of his dry sense of self-deprecating humor.