I apparently missed my one-year anniversary! I was notified by e-mail that my domain name was expiring (I actually let it lapse… oops…) and unfortunately, the last week had been too busy for me to do much about it. I’ve since renewed my domain, and have realized it’s long since time I come here for an update. 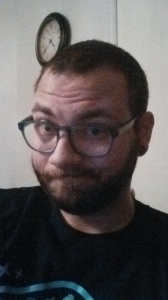 Not much has been happening on the writing front, though I did start a new pantsing project today. For those unfamiliar, “pantsing” is a term thrown about the NaNoWriMo forums, used in opposition to planning. Pantsers typically do not outline their books, or do very little outlining; planners, on the other hand, make detailed outlines before beginning a project.

This blog has a lot of my personal musings on writing, some news as to what I’m working on, but there is a scarcity of actual creative writing here. With an idea to remedy that, I may very well post all of my pantsing project as I go along. I may also write a story entirely on Google Drive, with my phone as the main interface. That said, here is a sort of prologue for my pantsing project, which I will call “Maelstrom” for the moment.

Ran looked up at the concrete sky not far beyond her window, counting the pale lights that hung there, grim parodies of stars. She had read about stars and seen images of them in books, but they shone far above anywhere she was likely to ever go. So she counted the lights from her bed as she lay waiting for sleep to take her.

The alarm threw her rudely from already fading dreams. She stumbled from her bed and rubbed sleep from her eyes. Her feet found her tattered slippers and she shuffled off to the bathroom to begin her morning ritual.

Eight flights down to street level, a diminishing piece of toast hanging from her mouth as she bounded down the stairs. The building that housed her school stood nearly within view of her home, a few bridges from one tower to the next would save her half the trip.

The lights above now glared with yellow light meant to be reminiscent of the sun, though surely sunlight did not give such an unhealthy tint to skin. Ran had read about the sun as well, another near-mythical object as far as she was concerned.

She checked her watch as she exited the stairwell on the sixth floor of her school, breathing heavily, trying to regain a semblance of composure which failed when she saw the time. She hissed a curse and ducked back into the stairwell. She was late, and her teacher would have locked the door by now, forcing any tardy students to knock and make a spectacle of themselves.

Ran frowned, then continued up the stairs.

No building on her level had more than eleven or twelve storeys, the concrete ceiling preventing growth beyond that. Her school was one of the rare buildings with twelve floors, ceilings being lower in classrooms. Probably to make us feel more oppressed, she mused darkly. Ran climbed to the twelfth floor, where one door led out of the stairwell to faculty offices, and another was bordered in red with explicit warnings written all over it.

WARNING: EMERGENCY USE ONLY. ANY NON-JUSTIFIED USE WILL RESULT IN CRIMINAL CHARGES.

She narrowed her eyes at this, then pushed the bar. An alarm began to screech, echoing down the stairwell. She ignored it and went through, pulling the door shut behind her.

Another stair continued up, lights flashing red and white as a different alarm sounded this side of the door. She continued up, her thighs protesting as she gripped the handrail and pulled herself along. Ran listened for the sounds of boots tramping down from above, or up from below, certain that enforcers would be along to apprehend her in a moment. Why did I do that? she thought giddily.

As she made the next landing, she stopped short, staring at a strange glimmer on the wall. It was the size and shape of a door, and seemed flush with the concrete. Yet it appeared to have depth, leading into a dark tunnel. The edges wavered and shifted, and Ran knew instinctively that the apparition would soon be gone.

She summoned a bit of energy against the aching in her legs, and bounded into the strange tunnel. It faded behind her silently, leaving solid wall and no trace of the young woman.