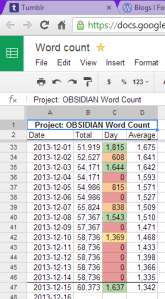 It’s a little disheartening to see how long it’s taken me to write another 10,000 words since the end of NaNoWriMo, but I just have to remind myself that I’m still doing far better than I was before November.

I have made mention of Project: OBSIDIAN a few times already without going into proper detail as to what it is. I had written a couple chapters of it before November of this year, which I set aside to do NaNoWriMo properly. As of now, I have nearly 60,000 words and only a few chapters left to write to finish my first draft. It is the story of Captain Kandace Li Renwright of the starship Sylphid, who begins the book resisting her crew’s efforts to change her mind about getting a synchronizer for the ship, a device that would allow the ship to maintain a constant connection to the interplanetary network no matter where they traveled. The following is an excerpt from my rough draft:

Yet Kandace continually refused, for she knew what a synchronizer was.

In a “humane effort” to eliminate the death penalty for particularly heinous crimes, the sentence of synchronization came about. The conversion process remained a tightly held secret, though it was suggested that it involved heavy amounts of psychopharmaceutical injected into the sentenced. It was said that their mind became too fragmented for conscious thought, essentially vegetables floating in a vat of nutrients, but their splintered mind became capable of sharing information with other similar minds, across amazing distances. Attached to a rig to convert biochemical signals to computer language and back, they found practical use as devices to extend the SEEC Central Network onto ships no matter how far they traveled.

Kandace had no intention of having such a person aboard her ship, no matter how much they deserved such a fate. She found the very idea disgusting, and wondered what a synchronizer was aware of. Did they experience constant, unconscious confusion as their brains were bombarded by computer signals relayed back and forth psychically? Did they dream, their minds desperately attempting to cobble together some kind of experience from the data downloaded and uploaded through them? Did it hurt?

Naturally, there wouldn’t be much of a story if she didn’t get to discover the answers to some of her questions. Before long, Kandace relents and procures a synchronizer for her ship, one who will reveal himself to be aware of all the information that passes through his mind, capable of manipulating it, and intent on finding out who he used to be before he was made into a sync.

I have been working on reading the Sandman from beginning to end. By “working on”, I mean that every few months or so I purchase the next trade volume at Chapters and proceed to devour it in a couple hours. I tried to finish them back in high school, ordering them at the library and waiting weeks between volumes, but the waiting became tedious. I had downloaded them and got a comic reader for my computer, but I quickly learned that I dislike reading for extended periods on a computer screen. I prefer to pay for them anyhow.

I love the way Neil Gaiman weaves a narrative through mythologies and literature. I feel proud for the references and subtle nods that I pick up on, knowing there are many more that fly right past me. I love the art, especially the sweeping vistas of the realm of dreams. I especially adore the personifications that are the Endless, each with their own quirks and personality flaws.

I am midway through Fables & Reflections now, using the security device as a bookmark. I had meant to slip it into my bag before work on Friday, but alas I forgot. I’m half tempted to dive into it right now, but I haven’t gotten any writing done for Project: OBSIDIAN this weekend and I really ought to put some effort toward that before I feel like a complete and utter failure.

To the stars it is, then. 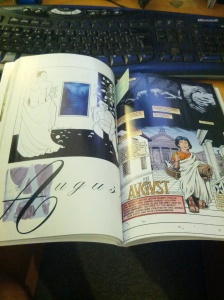